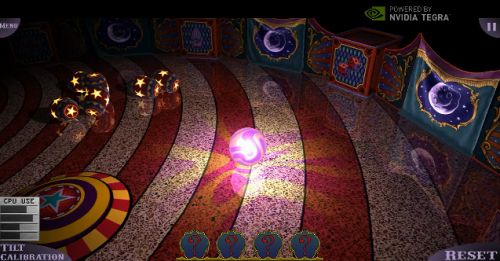 The company has put together a demo called Glowball which sounds simple enough — a glowing ball is rolling around a room. But the ball casts light and shadows across the room as you move the ball using the accelerometer in your device. You can also see curtains waving in response to the gravity effects as you move the tablet.

In the demo you can see the frame rate drops significantly when two of the CPU cores are disabled. The game simply isn’t playable using the equivalent of an NVIDIA Tegra 2 processor. NVIDIA says the Kal-El prototype chip it’s showing off today is also still in the early stages. By the time it actually ships later this year, the chip could be more than 25 percent faster.

Glowball will be available in the Android Market later this year for use on Kal-El devices. Honestly, as a game it doesn’t look all that interesting. But as a graphics demo, it’s pretty mind-blowing.