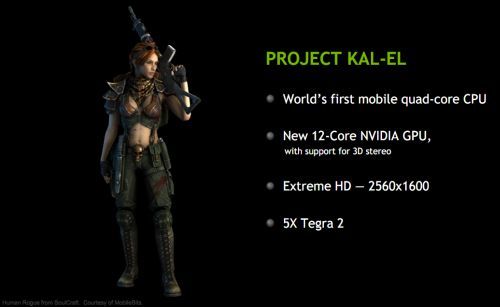 The NVIDIA Tegra 2 dual core processor is at the heart of virtually every Android tablet shipping with Google Android 3.0 in the next few months. But NVIDIA is already looking ahead. We already knew the company was working on a quad-core version of its low power Tegra processor codenamed Kal-El. Now NVIDIA CEO Jen-Hsun Huang says at least 10 devices using the chip are in development.

While details are still scarce, Huang says there are five phone makers and five PC makers working on Kal-El devices.

The new chips will be able to offer better performance thanks to the quad-core design, but more cores doesn’t necessarily mean more energy consumption. In fact, multi-core chips can often use less power than single core chips since the you can drop the voltage and clock speed while offering similar overall performance. In other words, a quad-core chip running at 300 MHz could theoretically offer performance similar to a single core chip running at 1.2 GHz under some conditions, while using just a fraction of the power.

NVIDIA’s next-generation Tegra chip is expected to ship later this year. It’s not yet clear whether we’ll see some of these 10 new devices before year’s end though, or if they’ll start to hit the streets in 2012.

3 replies on “NVIDIA: At least 10 quad-core Tegra-based devices in the works”