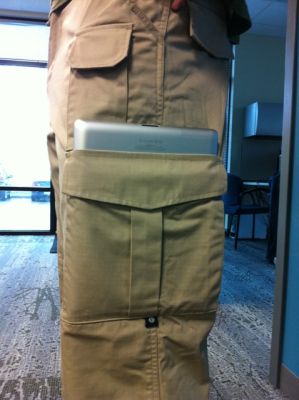 The iPad has often been lambasted as little more than a big iPhone… but you know what you can do with an iPhone that you can’t do with an iPad? Put it in your pants pocket. Or at least I thought that was the case. But as the folks at the Tactical Pants blog have discovered, nothing is impossible if you put your mind to it… and find a pair of pants with big enough pockets.

Tactical pants are basically the sort of pants with large and numerous pockets that you’d expect to find police officers and other emergency personnel wearing.

While you’re not going to be able to squeeze an Apple iPad with its 9.7 inch display into a typical pair of blue jeans, there are actually several different types of tactical pants with pockets large enough to accomodate an iPad 2.

Unfortunately the best fit is a pair of pants that’s been discontinued — and the best pocket to use was the back pocket, which means that you wouldn’t want to sit down with an iPad in your pocket.

You can cram the iPad 2 into some other pants, but the blog rules that most pants don’t offer much comfort or security when you’re toting around an iPad. The blog doesn’t mention this, but I’ll go ahead and add that one of the best ways to look ridiculous would be to walk around town with an iPad tucked into your trousers.

Of course, you could always whip out your iPad to take a Skype call in public. That would make carrying the tablet around in your pocket look positively sane.