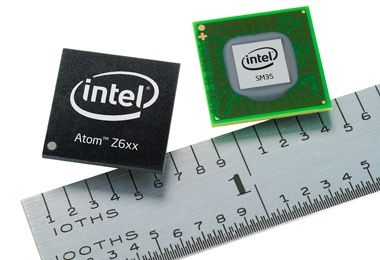 Intel is stepping up the pace on development of next-generation Atom chips. While the company has dominated the netbook space with its line of low power Atom processors for the last few years, the growing tablet and smartphone markets are currently dominated by low power ARM-based chips. Intel has been working to reduce power consumption of its chips while increasing performance, and now Intel CEO Paul Otellini says the company is redrawing its roadmap.

In other words, the Atom line of low power chips will hit 14nm at the same time as the company’s more powerful desktop and notebook chips. Right now Intel Atom chips tend to be a generation or so behind the company’s higher end designs.

EE Times reports that Intel isn’t just focusing on making its Atom chips more energy efficient though. A typical Intel notebook chip today has a TDP of 40W. The goal is to cut that to 15W with the upcoming 22nm chips which could lead to much longer battery life for next-generation notebooks and high-end slate computers.