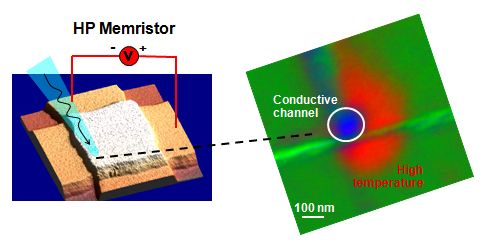 HP researchers say the company could begin commercial production of memory resistors (memristors) by mid-2013, providing an alternative to today’s DRAM and flash memory. The company built the first prototype memristor a few years ago, but scientists had predicted the possibility of memristors in the 1970s. The memristor is an electronic component that takes its place alongside resistors, capacitors, and inductors.

Now scientist from HP have published a paper exploring new research into technology.

Without delving too deeply into the science, memristors are passive circuit elements which can remember the electric charge passed through them. Here’s why memristors could be exciting:

Flash memory can store data when the power is turned off, but memristor-based memory could theoretically be much faster. DRAM is pretty speedy, but it requires power to retain information. That’s why a laptop will slowly lose it battery charge if you put it to sleep. Hibernation lets you preserve battery life by writing data to your hard drive or solid state disk instead, but it takes much longer to copy that data which is why it takes faster to put a computer into hibernation mode (or wake it up). Among other things, memristors could lead to faster hibernation and higher performance memory and/or storage.

via Slashdot, ComputerWorld, and BBC

One reply on “HP memristors could replace DRAM, flash in a few years”