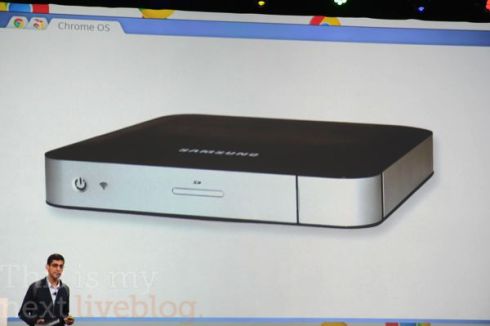 Google’s Chrome OS is set to launch as a notebook operating system next month, but basically Chrome OS is a light weight, fast-booting operating system that’s designed to support a powerful web browser. It can run on any hardware. So it should come as no surprise that GOogle is working with Samsung on a Chromebox desktop computer.

The company didn’t unveil many details about the tiny desktop today, but we got to see a few pictures and we found out that the first Chromebox will be aimed at enterprise customers initially.

Eventually we may also see Chrome OS on tablets. There’s already code in the operating system to support touchscreen displays, but Google has long insisted that the platform will launch first on notebooks, so it might be a while before we see Chrome OS tablets. Of course, Google also makes much of the Chrome OS source code available, which means there’s nothing stopping hardware makers or hackers from creating their own unofficial Chrome OS tablets.

via This is my next