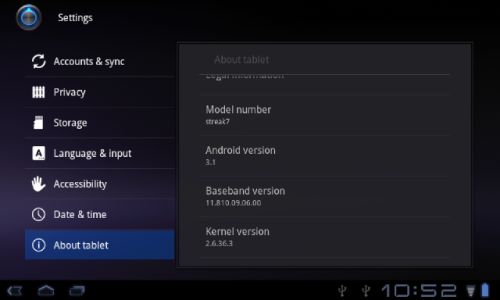 The Dell Streak 7 features a dual core NVIDIA Tegra 2 processor, just like pretty much every tablet shipping with Google Android 3.x Honeycomb. But the Streak 7 comes with Android 2.2 which is looking a bit dated. Last month we saw that a hacker had figured out how to install custom ROMs with Android 3.0 Honeycomb, and now he’s back with Android 3.1 for the Streak 7.

Hacker DJ_Steve is still fine tuning the software so it’s not available to the public yet. For instance, you can’t wake the tablet from sleep unless it’s plugged in. But you can check out the first demo video after the break which shows the 7 inch tablet running Android 3.1.

The biggest problem, of course, is that the Dell Streak 7 has an 800 x 480 pixel display. While there are some software hacks that can let you cram a little more information on the screen, it won’t look as sharp as a screen with a higher native resolution.