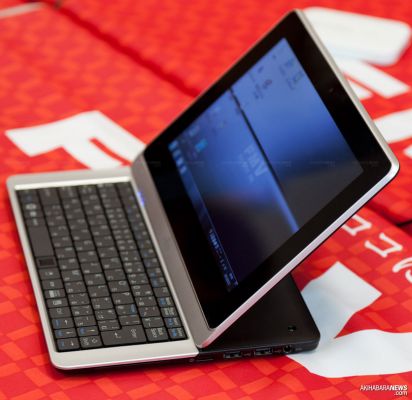 Fujitsu introduced a new Windows 7 tablet with a slide-out QWERTY keyboard this week, but so far I’d only seen rendered press shots of the Fujitsu TH40/D. Now the folks at Akihabara News have had a chance to check it out in person and we can see what the tablet looks like in the real world.

As expected, the computer is reasonably compact when used either in tablet or laptop mode thanks to a slim design and a keyboard which doesn’t waste space with any luxuries such as a palm rest or a full sized touchpad.

What’s interesting is that when you tug on the screen to pull out the keyboard, a kickstand descends and props up the display at roughly a 45 degree angle. It doesn’t look like you can change the angle. The base of the computer stays flat, allowing you to place the whole thing on a tablet, lap, or other surface for typing. You can also plug in peripherals using the base.

Honestly, the demo video below which shows the Fujitsu TH40/D transforming from tablet to notebook mode doesn’t lave me all that confident. It looks like the sliding mechanism is just waiting to break, but I’ll reserve final judgment until I can see one in person. The tablet also doesn’t go on sale until late June, so it’s possible that Fujitsu is still working out the kinks.