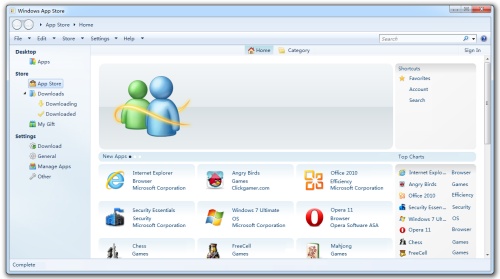 App stores are all the rage these days. Pretty much every major mobile phone platform has an app store, as well as some third party app marketplaces. And there’s a growing push to bring the model to desktop operating systems. Apple recently launched a Mac App Store, Intel launched the AppUp Center for Windows oftware, and Microsoft is expected to include an app store in its next-generation operating system.

Now some folks at CNBeta have posted what appear to be the first screenshots of the Windows 8 App Store, taken from an early build of the operating system.

Interestingly, the app store appears to be called the “Windows App Store,” which means there’s a pretty good chance that Apple will file a trademark claim against Microsoft if the company doesn’t change the name before launching the OS.

The Windows App Store looks like it’s tightly integrated into the operating system. In fact, the toolbars, sidebars, and other options make the whole thing look a lot like Windows Explorer, the operating system’s file browser. But there are the usual goodies including icons, descriptions, and charts showing the top apps.

Part of the appeal of Windows computers has historically been that you don’t need an app store, since most software you can find in physical stores, or on web sites is written for Windows and you can download and install pretty much anything you like. That’s what’s possible when your operating system dominates the competition.

But App Stores have turned out to be successful because the make the process of finding, purchasing, and managing apps so simple. Features like customer reviews and ratings, automatic updates, and the sense that someone might have looked over the app before it was added to the system to check for malware make the app store model attractive for consumers. Companies like Apple, Google, and Microsoft also typically benefit by taking a cut of revenue from app store sales.

Of course, Linux distributions have been providing a sort of app store for ages. The repository system has long made finding and installing apps relatively simple in popular Linux-based operating system such as Ubuntu, Fedora, and OpenSUSE. But Linux package managers have historically been a bit on the geekier side, and don’t include user ratings or infrastructure for selling paid apps.

What do you think? Are you looking forward to the addition of an app store to Windows?

Update: There’s reason to suspect that the screenshots may be doctored images of a new Chinese app store… but that doesn’t mean Microsoft isn’t working on an App Store for Windows 8.

14 replies on “Windows 8 to feature an integrated App Store”