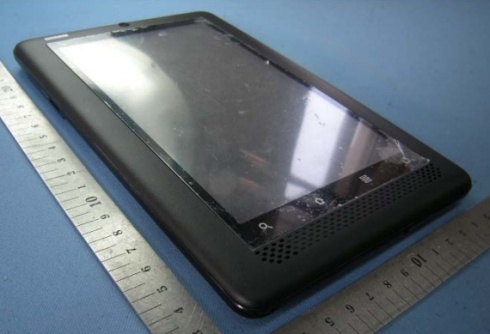 ViewSonic appears to be prepping a new 7 inch tablet called the ViewBook 730. Dave Zatz spotted the tablet at the FCC web site this afternoon.

The user manual doesn’t mention any detailed specs so we don’t know what kind of screen resolution or processor the tablet has. But the images suggest the ViewBook 730 will run Android 2.3 instead of Android 3.0 Honeycomb. The tablet also has soft buttons for Home, Menu, and Back functions, which aren’t necessary with Google’s latest version of the Android operating system.

The tablet features built-in stereo speakers below the screen, as well as an HDMI port, suggesting ViewSonic will pitch the ViewBook 730 as a multimedia tablet. It will also come bundled with eBook software.

The ViewBook 730 also features a headphone jack, built-in mic, USB port, and microSD card slot. There’s a front-facing camera and the tablet has volume buttons on the side. There are also indications in the user manual that the tablet supports Bluetooth and WiFi.

ViewSonic is no stranger to the Android tablet space. The company already offers a 7 inch model, along with an NVIDIA Tegra 2-powered 10 inch Android tablet and a 10 inch dual-boot model that runs Windows 7 and Android.

While we’re waiting for an official announcement about the new tablet, it looks like you can already pre-order the tablet for $318 from a handful of internet retailers such as CostCentral and PCSuperStore.