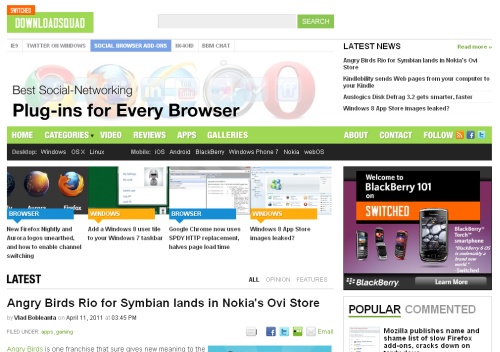 AOL has decided to shut down popular tech blog Download Squad. The site was launched by Weblogs Inc in 2005. It’s the second time an AOL web site I wrote for has been shuttered, although this time it happened after I left the fold. My first paid blogging gig was with PVR Wire, another Weblogs Inc site. At the time PVR was shut down there was a bit of outcry, but to be honest, the site was a tiny little spec compared to Download Squad which has consistently been one of the top sources for news about desktop apps, web apps, and mobile apps over the past 6 years.

Like PVR Wire, Download Squad will likely live on in corpse form for a while. As far as I can tell, AOL never figured out a great strategy for monetizing a blog that largely covered free software, even though millions of people visited the site every month. But it will continue to bring in revenue for months and maybe years to come as long as nobody goes and changes the URL structure (again). There just won’t be any new posts.

It’s a shame, because Download Squad regularly attracted talented writers who were enthusiastic about discovering new apps and sharing their knowledge with the community. I learned a lot about software, writing, and working with a team of bloggers across the globe during the three years I wrote for the site.

Fortunately my friend and colleague Lee Mathews, who has been an editor for Download Squad for the last few years as well as a contributor to Liliputing for the past few years has agreed to begin posting more regularly at Liliputing as well as Mobiputing.