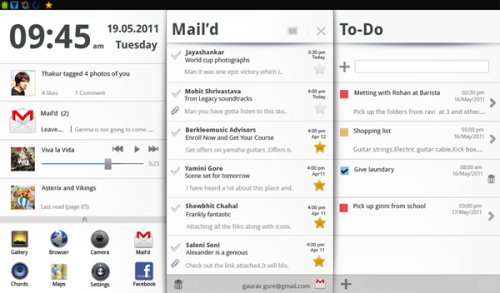 Notion Ink has announced a major update for the Eden software that runs on the company’s Adam tablet. The softare includes a new kernel, the ability to overclock the NVIDIA Tegra 2 processor, and Android 2.3 Gingerbread operating system.

The update also includes a new web browser, a new eBook app, a new music and video player, and other improvements including a new system for switching between running applications. Adobe Flash Player will also come preinstalled.

Overall it sounds like a pretty big update which could make the Eden UI a lot easier to use. The reason Notion Ink is updating the OS to Android 2.3 instead of Android 3.0 is because Google has only made the source code for the tablet-friendly version of the operating system available to a few partners, and Notion Ink isn’t one of the. But by using Android 2.3 code, the Adam tablet moves a little closer to Honeycomb, while continuing to run Notion Ink’s tablet-friendly software.

Honestly, the Eden software has gotten mixed reviews, and many users have found that disabling it and running the stock Android 2.2 software has made the tablet easier to use. It remains to be seen whether the upcoming software update will address that.