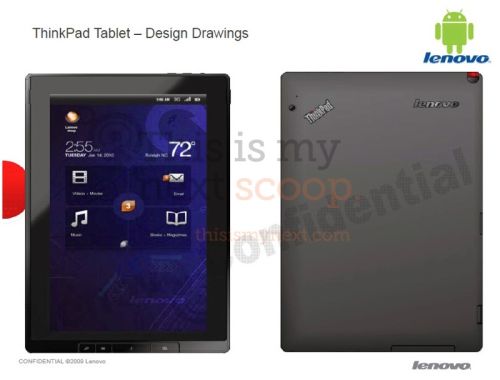 We already knew that Lenovo was working on an Android tablet called the LePad, as well as a Windows 7 tablet with an Intel Atom chip and stylus support. But now the folks at This is My Next have obtained a document suggesting that Lenovo is also prepping an Android 3.0 tablet as part of its ThinkPad line of business-oriented products.

According to the leaked presentation, the tablet will run Google Android 3.0 Honeycomb and have optional pen input as well as a portfolio case with a built-in keyboard, allowing you to use the tablet like a laptop.

Blogger Joanna Stern reports the ThinkPad tablet will have a 1 GHz NVIDIA Tegra 2 dual core processor and a 10.1 inch, 1280 x 800 pixel IPS display. It will have front and rear cameras, and 16GB to 64GB of storage. The tablet will have a capacitive touch panel, but there will also be an active digitizer for pen input.

As you’d expect from a ThinkPad machine, Lenovo is apparently pushing business-friendly features. In addition to the keyboard case and pen input, the tablet will offer remote desktop software and cloud collaboration software for accessing apps and documents on the go. Otherwise, the tablet looks a lot like any consumer oriented tablet, complete WiFi and 3D connectivity and HDMI output.

The ThinkPad tablet is scheduled to go into sampling in June. It could hit the streets in July or August.

You can find more photos and details at This is My Next. Bear in mind that the images may not represent the final design.

4 replies on “Lenovo ThinkPad tablet with Android 3.0 in the works?”