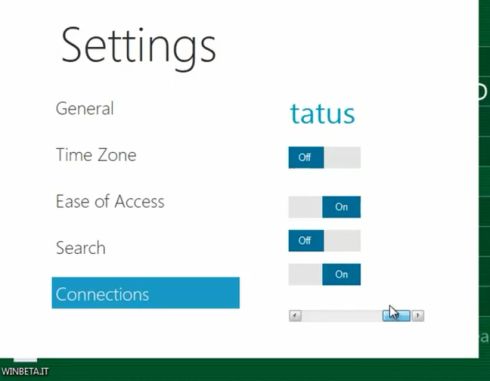 It’ll probably be another year or so before Microsoft is ready to officially release Windows 8, but leaked copies of an early build of the system have been making the rounds for the past few weeks and a handful of people have been kicking the tires to see what makes the OS tick. One thing that’s becoming clear is that Microsoft is attempting to make Windows 8 much more touchscreen-friendly, making the next-gen operating system easier to use on slate and tablet style computers than Windows 7.

Now a video has popped up showing a version of the Windows 8 settings panel which has been optimized for touch. In fact, the user interface looks a lot like the Metro UI you’d find on a Windows Phone 7 device.

There’s a series of panels for each setting, and while the demo video shows how you can move from one to the next with a mouse cursor, I’d be surprised if the system didn’t support finger-swiping motions when used with a touchscreen. There are also a series of on/off switches under some menus which should let you toggle WiFi, Bluetooth, or mobile broadband settings with a single tap.

You can check out the video below.

7 replies on “First look at touch-friendly settings panel in Windows 8?”