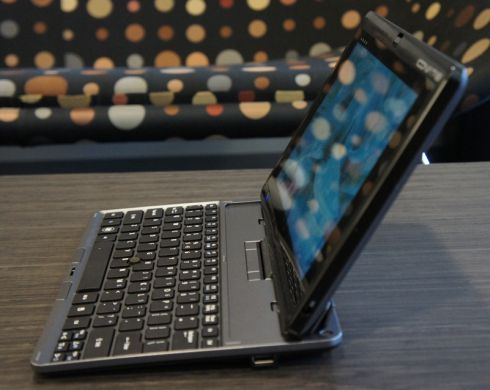 The Acer Iconia Tab W500 Windows 7 tablet went on sale today and the folks at Microsoft’s Windows Blog have posted a pretty good overview of the tablet and optional keyboard dock.

As far as the tablet goes, the computer has a high resolution 10 inch display, 2GB of RAM, a 32GB solid state disk and a low power processor with decent graphics. It weighs 2.15 pounds, which makes it rather heavy by Apple iPad standards, but lighter than most 10 inch netbooks.

Adding the keyboard base brings the weight to about 3.65 pounds though, which is pretty heavy by netbook standards… but still pretty light for a laptop I guess. And most laptops don’t give you the option of leaving the keyboard at home when you don’t need it.

The Windows Blog notes one thing that’s a bit disconcerting is the fact that you can’t “close” the Iconia Tab W500 like you would a laptop. You have to lift the tablet out of the docking station instead, but apparently this is easy enough to accomplish that you can do it with one hand.

The tester also reports that the tablet boots in just 38 seconds, shuts down in 14 seconds, and resumes from sleep in just 1.5 seconds. While the 1 GHz AMD C-50 processor isn’t all that powerful, the AMD Radeon HD 6250 graphics help make up for it, and you can apparently even play Crysis in full screen.

The least promising test result? The Acer Iconia Tab W500 got about 4.5 hours of battery life. That’s not awful, but it’s nowhere close to what we’ve come to expect from tablets running Google Android or Apple’s iOS. That’s not surprising, since the W500 uses an AMD chip which users far more energy than the ARM-based processors found in most tablets hitting the market this year.

6 replies on “Closer look at the Acer Iconia Tab W500”