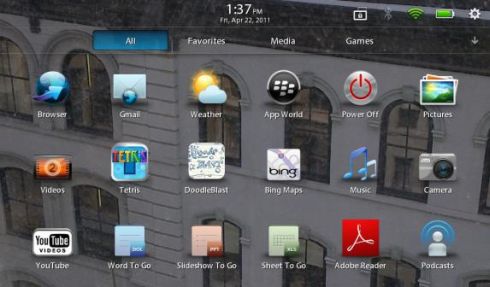 When the BlackBerry PlayBook tablet reviews started making the rounds earlier this week, there were two common refrains. First, the hardware is pretty good, but there’s not much good third party software. Second, the most annoying problem with the hardware is a small power button that’s awkwardly placed and hard to press to turn the tablet on and off.

While we’ll have to wait to see if third party developers flock to the platform with high quality apps for the PlayBook, Research in Motion has pushed out an operating system update with a surprising fix for the power button.

Business Insider notes that the latest software update adds a “Power Off” app which lets you turn off the tablet by tapping an on-screen icon.

Of course, this won’t let you turn on the tablet. To do that you’ll still need to play with the awkward button on the side of the device. But at least RIM is acknowledging a problem and issuing something close to a fix for existing users. There’s no way software can provide a complete fix, but hopefully RIM’s next tablet will have a better power button.