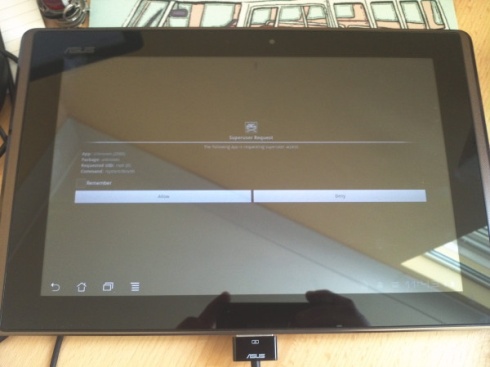 The Asus Eee Pad Transformer hasn’t yet hit stores in the US, and it’s only recently come on the market in the US and UK, but that hasn’t stopped Android hacker extraordinaire Paul O’Brien from taking a little time out of his busy scheduled to root the Android tablet.

The Eee Pad Transformer features a 10.1 inch, 1280 x 800 pixel display, a 1 GHz NVIDIA Tegra 2 processor, and runs Google Android 3.0. It’s not that surprising that someone already figured out how to root it since the hardware is quite similar to the Motorola XOOM, which has been available since February. Asus also released some of the source code for the tablet a few days ago.

Once you root an Android device you gain the ability to install officially unsupported apps and access portions of the file system and settings that would otherwise be closed off.

Of course, what really makes the Eee Pad Transformer special is the optional keyboard docking station which lets you use the tablet like a laptop computer. The ability to gain root access is just icing on the cake.