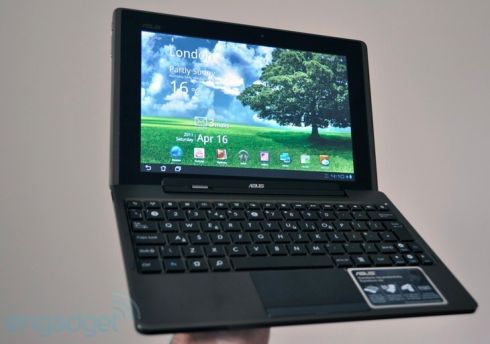 The Asus Eee Pad Transformer hasn’t hit stores in the US yet, but it’s on sale in the UK and the folks at Engadget have posted one of the first in-depth reviews of the British version of the new tablet. The Eee Pad Transformer is a 10 inch slate that runs Google Android 3.0 Honeycomb. But there’s also an optional keyboard dock which allows you to use the tablet like a laptop.

Engadget reports that the hardware buttons are well laid out, but the tablet is wider than a Motorola XOOM or Apple iPad 2, which isn’t a problem when you’re using the device as a laptop, but as far as tablets go it’s a bit on bulky side — although it’s no thicker than a Motorola XOOM and it’s actually a bit lighter.

The keyboard looks great, and the reviewer says it feels just as good — when it works. But Engadget says that there were multiple times when the tablet simply didn’t recognize the dock. The tablet is also apparently a bit iffy when it comes to recognizing SD cards or USB flash drives.

You can find more details about the camera, software, and overall user experience at Engadget. Long story short? It’s probably the best Android tablet around… but the software is still pretty rough around the edges at the moment. Hopefully there’s nothing wrong with the Transformer that can’t be fixed by software updates though.