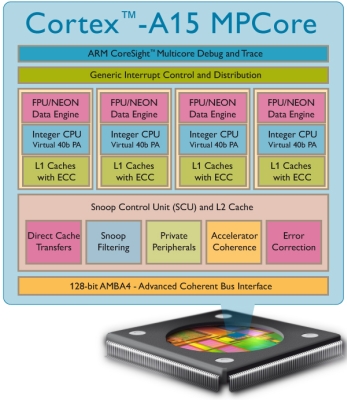 Chip designer ARM announced plans last year for next-generation Cortex-A15 chips which would come in single, dual, and quad-core varieties with clock speeds up to 2.5 GHz. Of course, it’ll take a while to actually finalize the platform, but PC World reports that ARM is ahead of schedule and the first Cortex-A15 chips could ship as early as late 2012.

The first chips will be dual core models, with the quad-core chips likely still slated for 2013.

ARM Cortex-A15 chips will be 28nm or 32nm low power chips with support for hardware OS virtualization and up to a terabyte of RAM. And did I mention there could be 2.5 GHz quad-core models eventually?

While Intel is hard at work trying to reduce power consumption in its chips to rival the ARM-based chips used in today’s smartphones and tablets, ARM is seriously ramping up the performance of its own low power designs ensuring that by the time Microsoft Windows 8 is ready to run on ARM, you shouldn’t be able to notice any major performance difference between an ARM-based system and one with an x86 processor.

Texas Instruments has already announced plans to build a 28nm Cortex-A15 chip in 2012.