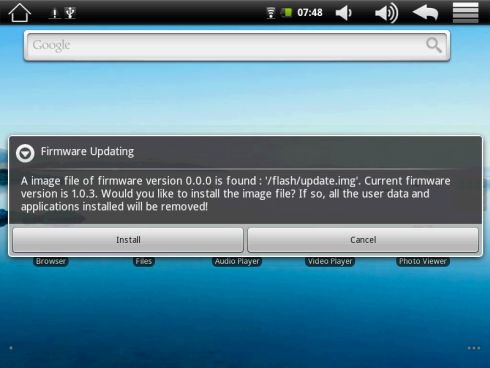 The Archos Arnova 8 Android tablet just went on sale in the US this week, but hackers have already built custom firmware for the tablet adding a few features you won’t find in the stock software — including access to the full Google Android Market. Like other Archos tablets, the Arnova 8 ships with the third party AppsLib app store, due to Google’s restrictions on Market access for tablets that don’t meet certain specifications.

The custom firmware is based on Android 2.1, just like the standard software that comes with the tablet. That means you won’t get Adobe Flash support or any other advanced features included in Android 2.2 and up. But since the software includes root access, you should be able to run some third party apps that won’t work on a normal Android 2.1 device, including software that lets you install apps to an SD card instead of the main storage if you want to conserve space on the tablet.

The hackers responsible for this software release are also working on an update including Android 2.2.

The custom firmware is called kasty-arn8-21-01, and it’s designed specifically for the Arnova 8 tablet. You shouldn’t try to install it on any other Android device — and there’s no guarantee everything will work. If you break your $160 tablet, you’re on the hook for any repair or replacement costs. If you’re cool with that, hit up Arc Tablet for information on downloading and installing the software.