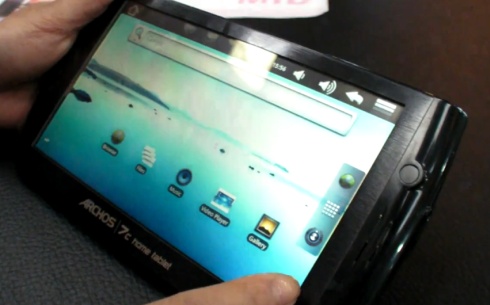 Archos is introducing yet another new Android tablet, and Charbax from ARMdevices got a look at a new version of the Archos 7c Home Tablet during a tour of the Archos office in China.

There’s a version of the Archos 7c already up for pre-order for around $200, but the updated model due out this summer will have a faster processor and updated operating system.

The 7 inch Archos 7c coming out  in June has a 1.2 GHz Rockchip 2918 ARM Cortex-A8 processor. It has a capacitive touchscreen display and supports Google android 2.3. The Archos rep describes it as the fastest chip available — which is kind of, sort of, almost true if you’re just looking at the clock speed. But since you can’t really measure chip performance in gigahertz alone anymore, it’s sort of a funny thing to say.

By the time the tablet is released this summer we’ll likely see a number of phones and tablets with single and dual core ARM-based processors with clock speeds up as high as 1.5 GHz.

That said, the Archos 7c looks like a nice upgrade to the Archos line of 7 inch Android tablets. It would be nice if the little guy was running Google Android 3.0 Honeycomb and if it had full support for the Google Android Market, but Archos tablet users have been installing hacked versions of the Android Market on the company’s low cost tablets for ages. I wouldn’t be surprised if the Archos 7c turns out to be just as hackable.