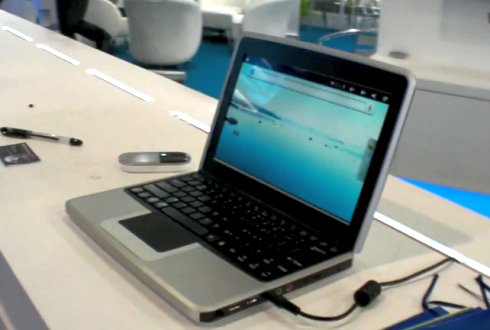 Charbax from ARMdevices is visiting a trade show in China this week and one of the more unusual devices he spotted is a mini-laptop with an ARM-based processor and Google Android operating system. That’s not too unusual, since we’ve been seeing cheap Chinese netbooks with Android for the past few years, but there are a few things setting this model apart.

First, it has a new RockChip RK2918 processor. It’s a 1.2 GHz ARM Cortex-A8 processor with support for Adobe Flash. Second, the netbook looks like a knockoff of the Nokia Booklet 3G.

The Android operating system has been tweaked to include a mouse pointer, although the software still looks a little rough around the edges. For instance, there’s no touchscreen display, but when you attempt to enter text, an on-screen keyboard pops up and covers most of the display.

The mini-laptop features 2 USB ports, mic and headphone jacks, and built-in speakers. Charbax imagines it should get extra long battery life due to the low-power processor and light weight operating system, but the RockChip booth representative didn’t seem quite as certain.

I don’t expect to see this laptop in the US anytime soon, but it’s one of the nicer Android-based laptops I’ve seen.