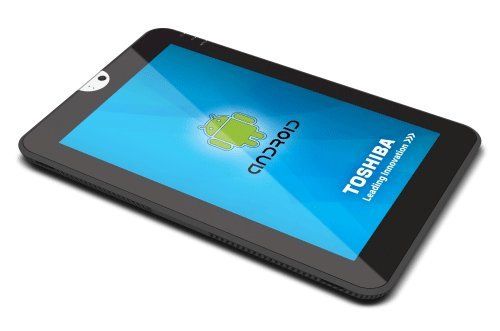 It’s not up for order yet, but Toshiba’s upcoming 10 inch Android tablet now has a product page at Amazon

. As Toshiba told us at CES this year, the tablet will feature a high resolution 10.1 inch, 1280 x 800 pixel capacitive touchscreen display, a 1 GHz NVIDIA Tegra 2 dual core processor, and Google Android 3.0 operating system. And more than two months after first introducing the tablet, Toshiba still hasn’t managed to come up with a better name for it than “Toshiba Tablet.”

The tablet has a 5MP rear camera with autofocus and a 2MP camera on the front. It has USB, HDMI, and SD card ports, Bluetooth and WiFI, and a changeable rubber backplate that comes in a variety of colors.

The Toshiba Tablet has a gyroscope, accelerometer, e-compass, GPS receiver, and ambient light sensor. And unlike many tablets hitting the market this year, the Toshiba Tablet will have a user replaceable battery.

You can find more product images after the break.