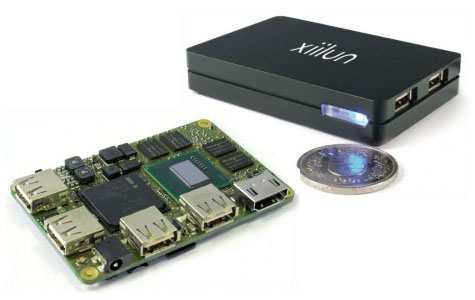 The TDP of the E6xx should range from 2.7 Watts for the 600MHz versions to 3.9 Watts for the 1.6GHz E680 and E680T, making this a very low power device.  That allows for a fan-less design while still providing the functionality of a x86 PC.

The Topaz SBC itself is just 55 x 84 x 12.7 mm in size, and include 4 USB2.0 ports, a bootable microSD Card Slot, and a DVI-D output on a HDMI connector.  The total package is roughly the same size as a small powered USB hub, but the computer offers the kind of power you’d get from a traditional Nettop range PC.

The only down side is that you’ll need to use a USB port to add any peripherals for WiFi, LAN, 3G, Bluetooth, or audio. That means the compact size won’t be so compact after fully equipping the system, but overall the system should remain pretty compact and flexible.  While not everyone will need to connect every possible device to the system, or at least not all at once all the time as a matter of practicality.

The platform can support video hardware acceleration that can be taken advantage of for HD video (up to 1920×1080).  Whether the driver support will be better than the GMA 500 remains to be seen but the specs and early Intel demonstrations look promising.