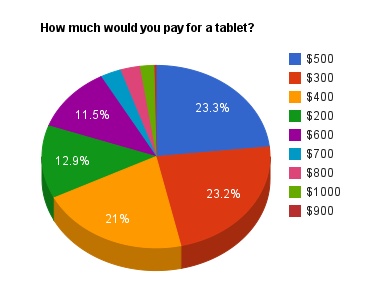 Consumer oriented tablet computers are hitting the streets faster than anyone can count. Some of the tablets coming out this year will be budget models meant to function primarily as eBook readers, web surfing devices, or portable video players. Others will have high performance multi-core processors, high resolution displays, long battery life, and these high end models could replace a laptop computer in many situations.

So far the Apple iPad has been the runaway success story in the tablet space, with Apple shipping almost 15 million units in 8 months last year. But dozens of companies are hoping to compete with the iPad either by producing cheaper or more powerful devices. Surprisingly, we’re not seeing many tablets that offer more features and a low price tag though. Prices seem to range from under $100 to over $800 for consumer tablets, and for the most part it looks like you get what you pay for, although there’s certainly room for discussion on that point.

But how much do people actually want to pay for slate-style devices running Google Android, iOS, HP webOS, BlackBerry’s QNX software, or even Windows? I realize that some people wouldn’t spend a penny to get a tablet because it’s not a device that fits their needs. But I posted a poll this weekend to see how much people are willing to spend on a tablet that does meet their needs, and I was pretty surprised at the results.

The first surprise was that more than 1300 people responded in just a few days. The second surprise is that while the vast majority of respondents are only interested in tablets that run $500 or less, almost 20% would be willing to pay more than that, with 153 people saying they’d pay up to $600.

Another surprise? While the “under $200” option was fairly popular, with 172 votes, more people said they would spend $300, $400, or $500 on a tablet than “up to $200. I suspect that’s because most people realize that if you spend $200 on a tablet you’re not likely to get premium features such as a high resolution display with wide viewing angles, a full range of sensors — and for now at least, official support for the Google Android Market.

You can see a few more graphs showing the poll results after the break, or you can click on the image at the top of this post to see an interactive version of the graph. 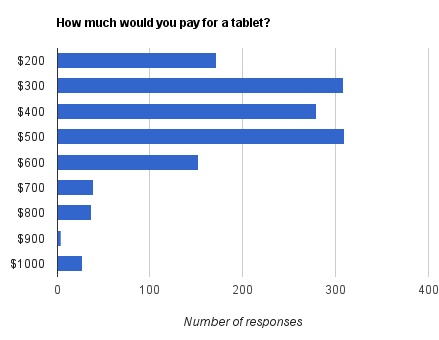 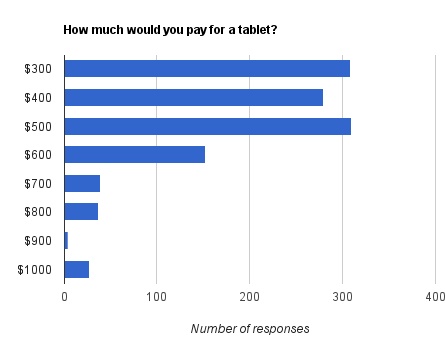 13 replies on “Poll results: How much you would pay for a tablet”