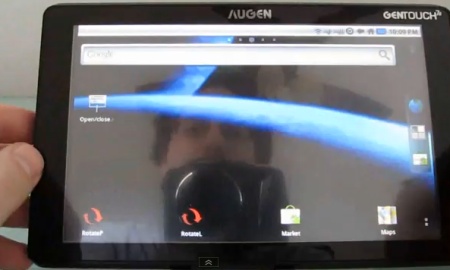 The Augen GenTouch78 made headlines when it hit the streets last summer because it was one of the cheapest Android tablets you could walk into a store and buy in the US. That didn’t make it a good tablet. In fact, it’s probably one of the worst tablets I’ve used, thanks to a sluggish processor, non-responsive touchscreen, and software that’s barely usable. But there are some things you can do to make the tablet a little more useful.

PandoraDroid is a not-quite-complete replacement for the software that comes with the GenTouch78. The developer added support for the Google Android Market and other Google apps including Gmail, YouTube, and Google Maps.

PandoraDroid also removes the default app launcher, and several other apps and replaces them with ADW Launcher, the Android 2.1 3D photo gallery and other apps. There’s also a custom theme and custom buttons added to the status bar for Home, Menu, and Back buttons — so you don’t have to try to locate the buttons on the back of the device every time you want to return to a previous screen.

The hacked software also includes root access and Clockwork Recovery, which should make it easier to install other custom ROMs on the Augen GenTouch78, although I haven’t really run across any other ROMs for the tablet.

PandoraDroid was released in September and it doesn’t look like it’s been updated since then, so I wouldn’t expect much more from this project. But it’s still probable your best bet for squeezing a little more out of this cheap tablet.

You can find more details, download links, and installation instructions at Android Spin. You can check out my hands-on video showing some of the features after the break.