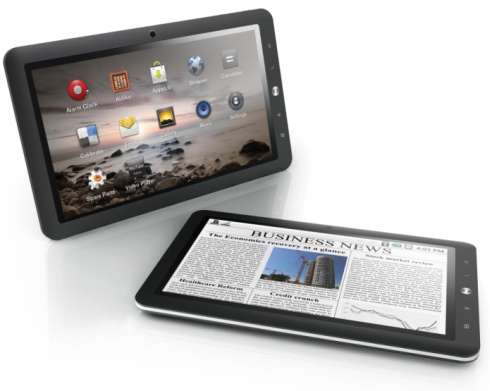 Budget consumer electronics maker Coby introduced a handful of new Android tablets at CES in January. Now Four of those devices are up for pre-order at Amazon, with prices ranging from about $173 to $260. All four are set to ship around March 15th.

The top of the line Coby Kyros MID1025 features a 10.1 inch, 1024 x 600 pixel capacitive touchscreen display, while the other models have 7 to 8 inch resistive touch screens. Here’s a quick overview of what you get with each tablet:

The defining feature of the MID8025 is its larger 8 inch display. This tablet has an 800 x 600 pixel resistive touchscreen display, a 1 GHz ARM Cortex A8 processor, 4GB of storage, and all the other goodies you’ll find on the 7 inch models. It’s just a little larger.

Oh yeah, it also has a slightly higher capacity 3.7V, 4500mAh battery which should help power the larger display.

The rest of the specs are identical to the little guys, including the 1 GHz processor, mic, headphone, speaker, USB, and HDMI ports. the MID1025 features 802.11b/g WiFi, 4GB of of storage, and runs Google Android 2.3.

Curiously absent from Amazon.com is any mention of the Coby Kyros MID1026, which will feature a 10.1 inch, 1024 x 768 pixel capacitive touchscreen display, although a few other stores are showing listings for that model.

Update: It looks like the new models may not be available until May or June.