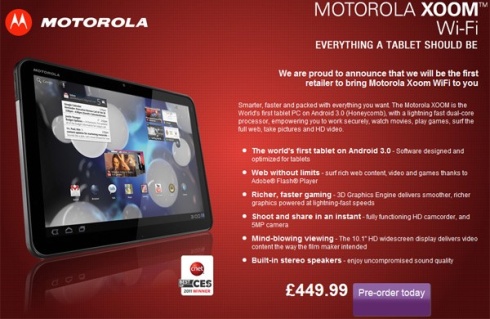 The Motorola XOOM may be the first tablet to ship with Google Android 3.0, but some folks seem hesitant to pay the $800 it costs to purchase the tablet from Verizon Wireless in the US. Motorola is expected to offer a cheaper WiFi-only version of the tablet, but there’s no word on a US price or launch date. But now UK retailer PC World may have leaked some pricing information.

The company posted a page for the XOOM WiFi, and last night PC World was showing a price of £449.95 for the tablet. That’s about $733 US, which might sound like a lot, but it’s actually cheaper than a iPad WiFi with 32GB of storage in the UK.

Unfortunately it looks like PC World has pulled the price and pre-order information from its web site, so either the information wasn’t supposed to be shared just yet, or maybe it’s not accurate.

While nobody’s talking about how much the XOOM WiFi will run in Germany, Android Community spotted a press release from T-Mobile that sets the price for a 3G version of the tablet at €699.95, or about $968 US. The tablet is due out in April and will feature an HSPA modem for speeds up to 14.4 Mbps.