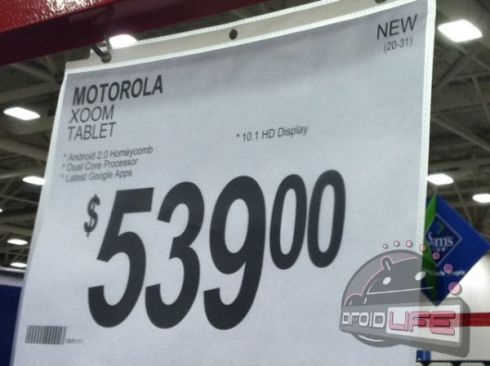 The Motorola XOOM is the first tablet to ship with Google Android 3.0 Honeycomb. It’s also got more features than you can shake a stick at, ranging from a dual core NVIDIA Tegra 2 processor and 1280 x 800 pixel HD display to a wide range of sensors including an accelerometer, gyroscope, and even a barometer. Seriously.

Unfortunately, the XOOM has gotten a lot of flak for a high starting price. Right now it’s available for $799.99 if you buy a contract-free 3G capable version of the tablet, or $599.99 if you sign up for a 2 year contract with Verizon wireless. Word on the street has been that a WiFi-only version of the tablet might sell for around $600. But it looks like there’s good news for thrifty Android tablet shoppers: Sam’s Club may offer the tablet for just $539.

Droid Life received some photos from a Sam’s Club employee who says that the retailer will offer a WiFi-only XOOM tablet for $539.

That said, the price could be wrong. You might notice that while the sign says $539, it also says Android 2.0 “Homeycomb.” At least one of those things is probably a typo.

You can find more photos at Droid Life.

Update: Android Community spotted the XOOM at CostCo, where the 3G version is going for $589 to $789 depending on whether you want to pay for a contract.