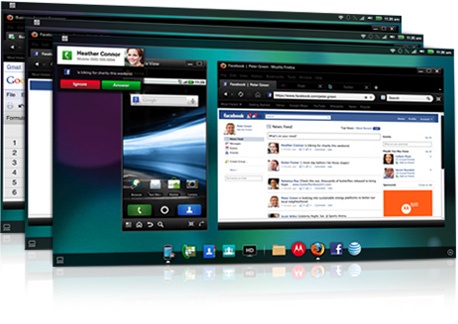 The Motorola Atrix 4G is an Android smartphone with a dual core NVIDIA Tegra 2 processor and a few tricks up its sleeve. Connect a media docking station and you can access the phone’s functions on a big screen TV or pump out HD video to your TV while controlling playback with a remote. Connect a laptop docking station called a Webtop, and your phone effectively turns into a laptop. But now it’s possible to use the Webtop software without the optional $499 Webtop hardware.

XDA-Developers forum member Fenny has posted instructions on how to tweak an Atrix 4G phone to load the Webtop software when you plug any external display into the phone’s HDMI port.

This will allow you to use an on-screen touchpad and keyboard on the phone along with an external display. Better yet, if you have a Bluetooth mouse and keyboard you can use the software like a traditional keyboard.

The Webtop software is based on a simple Linux operating system that basically does two things well: Run a Firefox web browser and show your phone’s UI on the desktop so you can run Android apps or even take phone calls in Webtop mode. I suspect it won’t take long for users to figure out how to get more native Linux apps up and running though, turning this phone into a full-fledged computer.