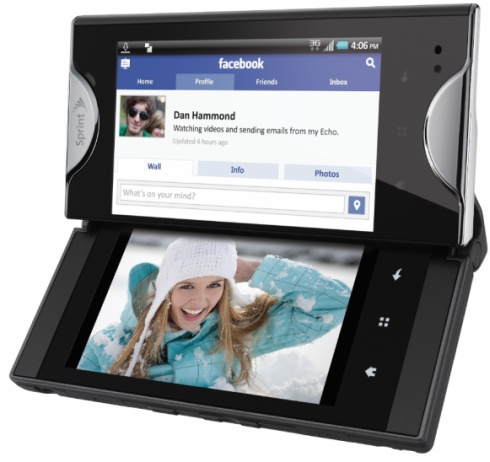 Sprint has announced that the wacky dual-screen Kyocera Echo Android smartphone will be available for $199.99 on April 17th. Pre-orders start on March 26th.

The Echo blurs the lines between a phone, tablet, and netbook, thanks to it’s dual-screen design which lets you use the device in three modes. You can hold it like  standard, single-screen smartphone or open it up all the way to run two apps in side-by side windows. You can also run apps across both screens, treating the two 3.5 inch displays like one big (well, biggish) 4.7 inch screen.

The Kyocera Echo runs Google Android 2.2 and features 802.11b/g WiFi, 3G, a 5MP facing camera with autofocus and flash, Bluetooth 2.1, and 1GB of storage. It has a 1 GHz Qualcomm Snapdragon processor and each screen has a display resolution of 480 x 800, giving the phone a 960 x 800 pixel display when fully unfolded.