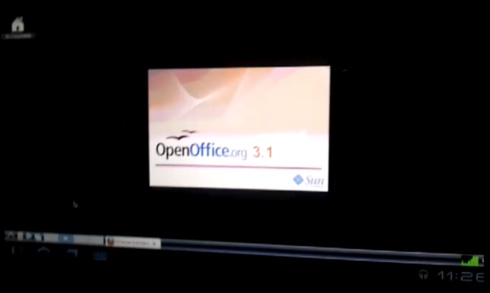 Sure the Motorola XOOM is the first tablet to ship with Android 3.0 Honeycomb — Google’s first attempt at a truly tablet-friendly operating system. But if Honeycomb isn’t enough OS for you, how about Ubuntu Linux? Thomas Sohmers figured out how to get Ubuntu up and running on the XOOM, and he’s posted instructions and a demo video on his web site.

The process doesn’t actually replace Android on the tablet, but instead installs Ubuntu alongside it. To access Ubuntu from Linux, you actually run a VNC client. That means you can actually run Ubuntu inside a program window on your Android tablet — and you can flip between native Android apps and Ubuntu apps.

between operating systems and remove Ubuntu if you decide it’s not for you, without losing the Android software that came with your device.

In the demo video below you can see that Ubuntu 9.10 supports touch and offers a virtual mouse. The operating system is a bit sluggish, but it does allow you to run a full versions of Firefox, OpenOffice.org, and other desktop apps.

via Android Central and XOOM Forums