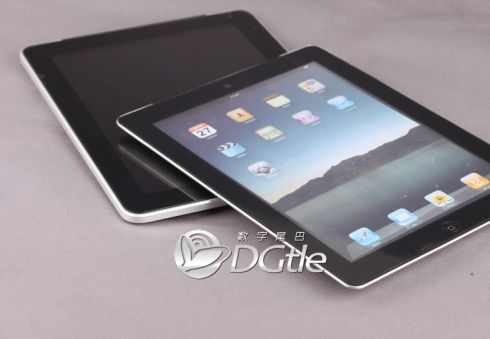 The Apple iPad 2 may have been unveiled just yesterday, but that doesn’t mean it’s too early for Chinese knockoff artists to start producing iPad 2 clones. In fact, one of the first is a tablet that many news sites were reporting on before Apple’s new tablet launched… under the impression that it could actually be the iPad 2.

It turns out this guy is just a knockoff device with the Apple name, logo, and iPad branding emblazoned on the back. But with the benefit of 20/20 hindsight, it looks like the company that put this little guy together got one thing right: It’s super slim and appears to be thinner than the original iPad. It also appears to maintain the same screen resolution and 4:3 aspect ratio as the original.

There’s no word on the specs or operating system. But I’d be surprised if this clone (or pre-clone, as it were), has a dual core A5 processor or runs iOS 4.3. I’d also be surprised if it makes it to retail outlets in the US, but if you happen to be in the market for a cheap Chinese tablet that bears a more-than-passing resemblance to the iPad 2, you could probably do worse.