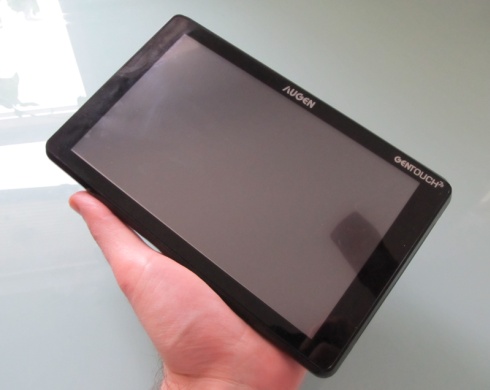 Update: The contest has ended, but stay tuned for more giveaways from Liliputing!

The Augen GenTouch78 was one of the first Android tablets to break the $150 mark in the US when it went on sale at KMart last year. It’s now available for even less if you shop around. The tablet isn’t a very good Android device. But with a little work, you can enable Google Android Market access, install third party apps, and use the tablet to watch videos, surf the web, and perform other simple tasks.

I picked up a GenTouch78 last summer for testing purposes, but I’ve barely touched it in months, so my loss is your gain. I’m going to give away the tablet to one lucky reader (or an unlucky one, depending on how you look at it).

The GenTouch78 has a 600 MHz TCC8902 processor, a 2100mAh battery, 256MB of RAM and 2GB of storage. It has a 7 inch, 800 x 480 pixel resistive touchscreen display. There’s an unusual button layout, with menu, home, back, and search buttons placed on the back of the device instead of the bottom.

The model I’m giving away has been updated with PandoraDroid, a custom ROM which enabled Android Market access, adds the ability to manually rotate the display, and places a home, back, and menu buttons in the status bar.

Here’s how to win.

Included in the contest is a lightly used Augen GenTouch78 tablet, a power adapter, and a USB cable for connecting the tablet to a computer.

The contest is open to US residents who haven’t won a Liliputing contest in the last 12 months and who aren’t close friends or family members of Liliputing writers.