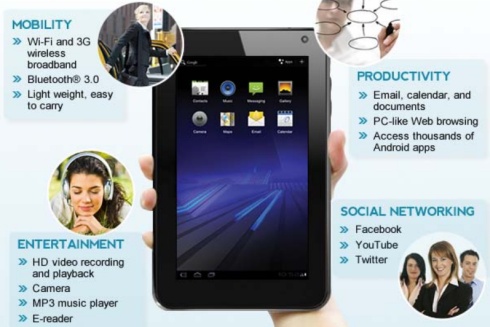 AnyDATA is unveiling its first two Android tablets this week at the CTIA trade show. Both models have 7 inch, 1024 x 600 pixel displays, Qualcomm processors, and light weight designs weighing in at just 0.97 pounds. But one model will ship with Google Android 2.3 Gingerbread while the other has Android 3.0 Honeycomb.

The higher end model is the AnyDATA AMD 810 which packs Android 3.0 and a 1.5 GHz dual core processor.  The AnyDATA AMD 120 will be a WiFi-only tablet with Google Android 2.3.

Both tablets have capacitive touchscreen displays, 802.11b/g/n WiFi, Bluetooth 3.0, front and rear-facing cameras, 512MB of RAM, and 4GB of storage. The tablets have accelerometers, ambient light sensors, and gyroscopes.

There’s no word on the pricing, but ZDNet reports that AnyDATA claims the tablets will be “value-priced,” and the WiFi-only model will eventually be available from a North American wireless carrier.