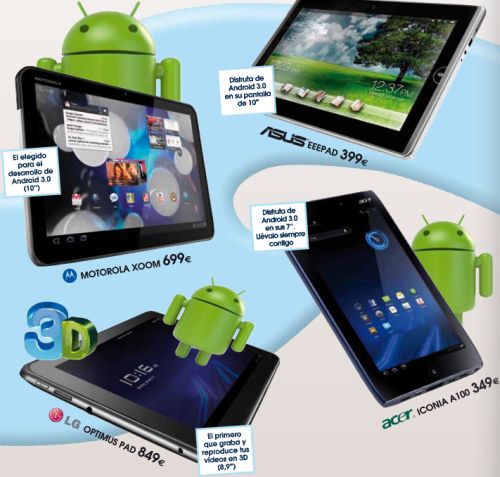 Acer, Asus, and LG have been showing off Android tablets for a few months, but aside from Asus most of the companies have been reluctant to spill any details about pricing. Now Spanish retailer Phone House has published an ad showing prices for 4 upcoming tablets including the Motorola XOOM, Acer Iconia A100, LG Optimus Pad, and an Asus Eee Pad.

The Acer Iconia A100 is one of the most intriguing models thanks to its relatively affordable €349 price tag. The tablet is expected to have a 7 inch display, 512MB of RAM, 8GB of storage, and a 1 GHz NVIDIA Tegra 2 dual core processor. It will run Google Android 3.0 Honeycomb.

The Asus Eee Pad tablet will cost €399. It’s not clear from the ad which model we’re looking at, but the Eee Pad Transformer with a detachable keyboard seems like a good bet. This model has a Tegra 2 processor, 1280 x 800 pixel IPS 10 inch capacitive touchscreen display, 1GB of RAM and between 16GB and 64GB of storage.

The Motorola XOOM will run €699, which is about par for the course with that model.

via Notebook Italia and Android Geek

4 replies on “Acer, Asus, LG tablets get priced for Spain”