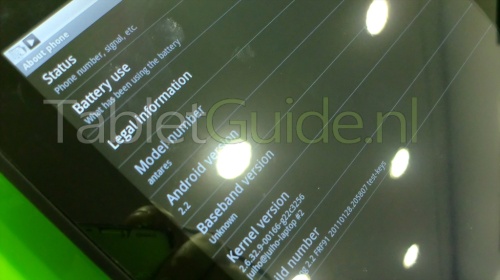 Toshiba has been showing off a 10 inch Android tablet since the Consumer Electronics show in January. The tablet has a 1280 x 800 pixel display and NVIDIA Tegra 2 dual core processor. It has a removable battery, USB and HDMI ports, and it even has an official product page. What it doesn’t have is a name.

Toshiba hasn’t officially unveiled the name for the tablet yet, but the company did show off the device at Mobile World Congress this week, where the folks at TabletGuide.nl dug around in the settings and came up with what may be a product name: Antares.

It’s also possible that Antares is just a model number. But if you look in the system settings it clearly says “antares” where my Google Nexus One says “Nexus One.” So it’s definitely something that Toshiba put there on purpose.

The Toshiba Android tablet will run Google Android 3.0 Honeycomb when it launches, but early demo units are running Android 2.2 Froyo. The tablet has a 2MP front-facing camera and a 5MP rear camera, Bluetooth and WiFi, and an SD card slot for expansion.