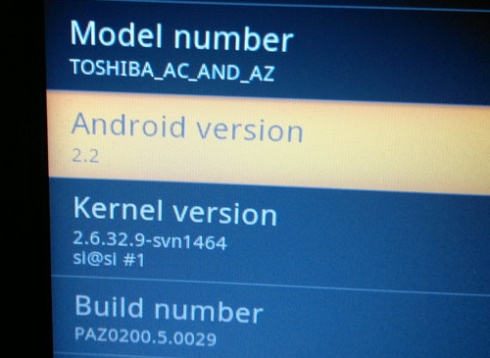 Toshiba has finally gotten around to launching a system update for the Toshiba AC100 mini-laptop which brings Google Android 2.2 Froyo to the notebook. The AC100 originally shipped with Android 2.1.

Chippy from CarryPad has snapped a few photos, and he’s currently testing the new software.

The update means that AC100 users can now download and install Adobe Flash Player. Android 2.2 also has a number of other improvements, including faster performance for 3rd party apps, the ability to install apps on an SD card, and other changes.

The Toshiba AC100 features a 10 inch, 1204 x 600 pixel display and a 1 GHz NVIDIA Tegra 2 dual core processor. It does not have a touchscreen, but instead has a notebook-style touchpad below the keyboard. It’s not currently available in the US, but began shipping in some parts of Europe last year.

Update: Chippy has posted some first impressions. He says the Toshiba AC100 feels faster and does better with streaming audio and video. It also scores much higher in performance and web browsing benchmarks.