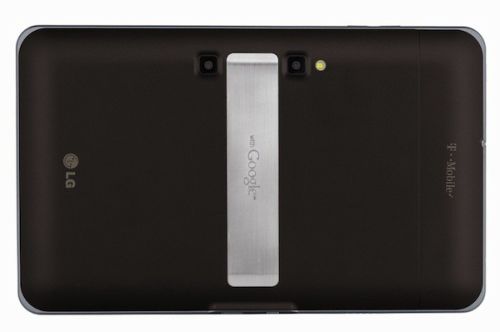 T-Mobile and LG have finally pulled back the (very thin) veil of mystery surrounding the upcoming G-Slate. As expected, the tablet will feature a 3D camera and 3D display for some reason. Here’s a rundown of the specs:

On the one hand it’s great to see a company thinking outside of the box and offering a tablet that doesn’t look like all the others coming to market this year. The 8.9 inch display is already an interesting choice at a time when competitors are largely flocking to 7 or 10 inch screens. But the 3D playback and recording capability truly sets the G-Slate apart.

That said, it’s also a risky move. Clearly the stereoscopic camera and 3D display are going to drive up the price of this tablet, and it’s not entirely clear whether there’s a huge demand for those features in mobile devices. While 3D movies are definitely a hit at the theaters and Nintendo is betting on glasses-free 3D for its next-generation handheld gaming system, I have yet to hear a person look at a tablet and say “you know, this is pretty nice, but it’d be so much better if I could put on a pair of special glasses and use it to watch 3D movies.”

Of course, the big problem right now is that there’s just not that much 3D content available. By adding 3D cameras to the device and getting it into as many hands as possible, LG and T-Mobile may have actually found a way to change that. Eventually we may see more movies and TV shows in 3D, but amateur video of the grandkids in three dimensions might be a good gateway drug.

The G-Slate is expected to launch in the US in March. There’s no word on pricing yet.

One reply on “T-Mobile to offer LG G-Slate with 3D cameras, display in March”