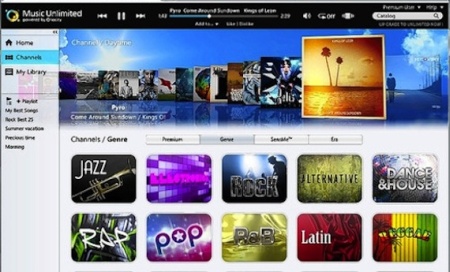 Sony has teamed up with music labels Universal, EMI, and Warner to create a new streaming music service called MusicUnlimited powered by Qriocity. The service is already available in parts of Europe including the UK, France, Germany, Italy, and Spain. It will soon launch in the US, Australia, and New Zealand as well.

Music Unlimited represents an attempt by Sony and the other record labels to take on Apple and its industry-dominating iTunes music store. Apple is expected to introduce its own streaming music service soon.

But while Apple’s iTunes service is tied to computers and Apple mobile devices including the iPhone, iPod touch, and iPad, Sony will tie the Music Unlimited service to a wide range of devices with a heavy emphasis on gadgets that reside in the living room such as PlayStation 3 game consoles, Blu-ray disc players, and Sony Bravia television sets. PCs and Google Android phones will also be supported, but iOS apps won’t be available until later this year.

Sony is hardly the first company to offer a streaming music service. Music Unlimited will enter a crowded marketplace, competing with Rhapsody, Rdio, MOG, and others. But the record labels involved in the new venture have a lot of clout and a decent music catalog. Music Unlimited will offer 6 million songs.

A basic subscription for Music Unlimited will run $3.99 and offer a Pandora-like service where you can listen to radio-like music channels with the ability to skip and rate songs. For $9.99 per month you can listen to songs on demand.

One reply on “Sony, EMI, Warner and Univeral launch a streaming music service”