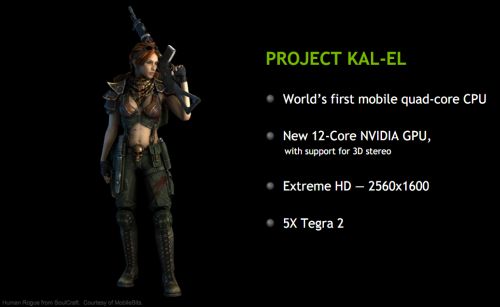 NVIDIA is planning to bring a quad core mobile processor to market later this year. The company introduced its new platform, code-named Project Kal-El at Mobile World Congress today, showing a working prototype. The chips should be available in tablets this August, and smartphones by Christmas.

While the Project Kal-El chip has a quad-core CPU, it also has a 12 core NVIDIA GeForce GPU. While plenty of current mobile chips strut their stuff by decoding 1080p HD video content, NVIDIA’s new chip can handle 1440p video on a 2560 x 1600 pixel display.

NVIDIA says the new chip offers up to 5 times the overall performance of a Tegra 2 chip, and 3 times the graphics performance — but under most conditions it will consume less energy helping provide longer battery life for smartphones and tablets. That’s because you can run four cores at a lower voltage and clock speed while offering similar performance to a single or dual core chip running at a higher speed.

The company hasn’t yet decided if Kal-El will be renamed Tegra 3 before launch, but it is basically the successor to the popular Tegra 2 chip.

NVIDIA is sticking with the superhero theme for other upcoming chips. Kal-El is Superman’s Kryptonian name, while future chips will be called Wayne (as in Bruce Wayne of Batman fame), Logan (Wolverine of the X-Men), and Stark (ie: Tony Stark, or Iron Man). These chips will come out one per year for the next three years, with the Stark chip offering 75 times the performance available from today’s NVIDIA Tegra 2 chips.

While Kal-El is certainly exciting, it’s not the only quad core mobile chip on the horizon. Qualcomm and Freescale have both promised to bring quad core chips to market by year’s end.