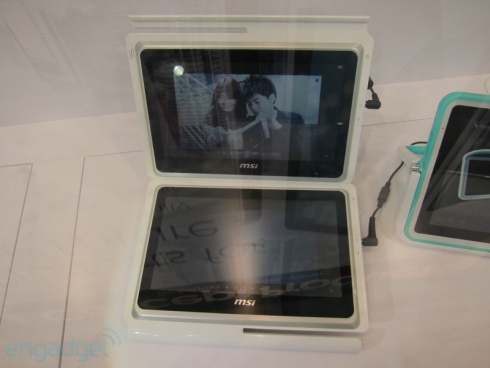 MSI has introduced a new computer concept called the Dual Pad. In case you couldn’t guess by the name, it’s pretty much what you would get if you took two tablet and stuck them together. In fact, since the Dual Pad is concept device at this point, that’s almost exactly what it is: a piece of plastic that holds two tablets.

The company is showing off the concept at CES this week, and the idea is that the two tablets could work together and work as single large display running a single operating system — or you could separate the tablets and use them individually so that two people can work, surf the web, or watch videos at the same time.

MSI has a history of showing off concept devices that make you go hmmm… and then make you think, “umm, yeah, I don’t think I need that.” First there was the Projector PC, which packs a whole desktop computer into a projector. Then we saw the MSI SketchBook concept which was a laptop with a built-in drawing tablet. And then the company refined its projector concept, this time integrating a projector into a tablet PC instead of going the other way around.

And don’t forget, over a year ago MSI showed off one of the first prototypes for a Windows 7 netbook with twin displays, allowing you to either view content across both displays or use the lower display as a virtual keyboard. While MSI’s first dual screen laptop never made it to market, Toshiba and Acer both launched similar computers after MSI blazed the trail.

You can find a video of the new Dual Pad concept in action after the break, thanks to Engadget. You can also find more photos at Engadget.