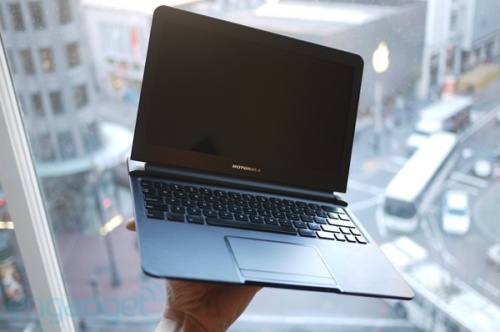 The Motorola Atrix 4G is an Android smartphone with a dual core NVIDIA Tegra 2 processor and a whole slew of accessories that transform the phone into the brains of a notebook computer or a home theater system, the company has started to send out demo units, and the folks at Engadget, MobileCrunch, GigaOm, and Business Insider have posted some previews. BGR went all-out and posted a full review. AT&T is expected to begin offering the phone in the US on March 6th.

What’s the verdict so far?

BGR calls the Atrix 4G the world’s fastest phone… although that will change soon as a number of handsets hit the market with NVIDIA Tegra 2 chips. Still, you probably won’t find a faster phone for a while, which makes the Atrix 4G a pretty good bet if you’re looking for high power performance on an Android device. It also makes the Atrix 4G a good choice if you’re say, Motorola and you’re looking for a phone to bundle with a media docking station or a laptop docking station.

The phone comes with the MOTOBLUR user interface running on top of Android, which will likely turn off some users. But BGR says it works pretty well on the phone thanks to its zippy processor which doesn’t slow down to deal with Motorola’s software. Battery life seems to be pretty good, but the high resolution 960 x 540 pixel display reportedly doesn’t actually look sharper than the screens on many other Android phones.

The Webtop laptop docking station is an interesting device which basically doesn’t have any processor or memory of its own. It’s basically an 11.6 inch display and keyboard/touchpad which is designed to work only when the phone is docked. BGR says the software which brings up a virtual phone on the laptop screen, while letting you use a full-fledged Firefox web browser in full screen mode worked pretty well, but the keyboard, touchpad, and overall experience of navigating the user interface wasn’t all that great.

The biggest knock against the keyboard dock though, is the price. You can pick up the Atrix 4G phone for $199 on contract, but if you add the dock the price jumps to $499. If you want the Webtop dock off contract, you’ll end up paying $499 for the docking station alone.

Overall, it sounds like the Atrix 4G might be a great phone with some excellent expansion options — but whether the accessories are worth the price is an open question at the moment. We should see more reviews in the coming days, and Motorola will be sending me a demo unit to test soon as well.

2 replies on “Motorola Atrix 4G previews starting to roll in”