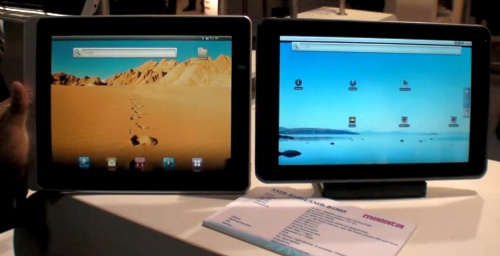 Chinese PC maker Malata has been showing off Android tablets with NVIDIA Tegra 2 dual core processors for the past six months. But the company is introducing a couple of new models at Mobile World Congress this week. They not only have Tegra 2 chips, but they also have high resolution displays.

First up we have the Malata SMB-B1004 and B1005 which feature 10 inch 1280 x 800 pixel displays with wide viewing angles and support for 10-point multitouch. The tablets will come with 1GB of RAM and between 8GB and 32GB of storage. They pack USB ports, microSD card slots, and front and rear-facing cameras as well as WiFi, Bluetooth, and GPS .

The tablets are designed to run Google Android 3.0 Honeycomb and feature all the usual senors including a light sensor, gyroscope, accelerometer, E-compass and vibration sensor. They weigh about 1.7 pounds.

Malata is also introducing the MB-B9702 tablet with a 9.7 inch, 1024 x 768 pixel display with a 4:3 aspect ratio. It has an IPS display for wide viewing angles, and the rest of the specs are pretty similar to what you get from the other models including a dual core processor, Android 3.0, and 1GB of RAM. It looks like Malata dropped the rear camera on this model though. It just has a 1.3MP front-facing camera.

ARMDevices has a hands-on video showing the new tablets, including an iPad-like user interface running on the Malata MB-B9702. You can check it out after the break.