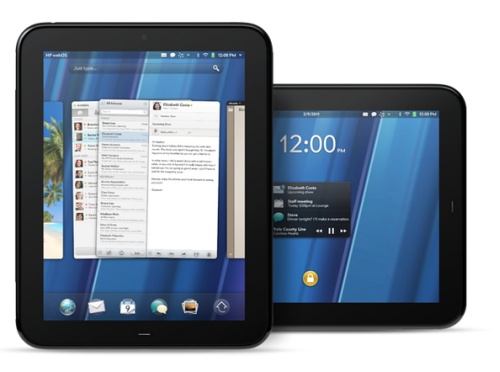 HP has officially introduced its first webOS tablet, the HP TouchPad. The tablet features a 9.7 inch, 1024 x 768 pixel display and weighs about 1.6 pounds. A WiFi-only version is due out this summer, with 3G and 4G versions set to follow. We’d been led to believe that the tablet could be available earlier than that, but them’s the breaks.

The HP Touchpad measures about half an inch thick, has a 1.3MP camera and supports video calls. It has stereo speakers, 802.11b/g/n WiFi, Bluetooth 2.1, a dual core 1.2 GHz processor, 512MB of RAM, and 16GB or 32GB of storage. There’s a gyroscope, accelerometer and compass. The tablet will have a 6300mAh battery.

Basically, the TouchPad is what you would get if you took a Palm Pre, blew it up, gave it a higher resolution display, and took away the keyboard. It’s pretty clearly HP’s answer to the Apple iPad: but aside from the dual core processor and webOS 3.0 operating system, it really doesn’t seem all that different from the iPad, which makes me wonder if it’s really enough. While webOS supports Adobe Flash and has better support for multitasking, the OS hasn’t exactly won over the masses in the smartphone space the way iOS has.

That said, HP has developed a resizeable virtual keyboard which can be used in small, medium, or large modes on a tablet. There are also a series of apps which have clearly designed to be used on a tablet rather than a keyboard. That includes a dual-pane email app, a beautiful photo and video browser, and a notification system which doesn’t take up too much screen real estate.

Probably the biggest selling point for the tablet right now is how it integrates with webOS on a smartphone. If you have a webOS phone and a TouchPad tablet, you just login with your account information and all of your data will be made available on both devices — much the same way as you can login to multiple Android devices using your Google account info.

But the TouchPad will also let you do things like send and receive text messages or even make phone calls by connecting wirelessly to a webOS phone. The devices work together in other ways too. For instance, you can open a web site on your phone and tap it against the tablet to open the same web site on the Touchpad. 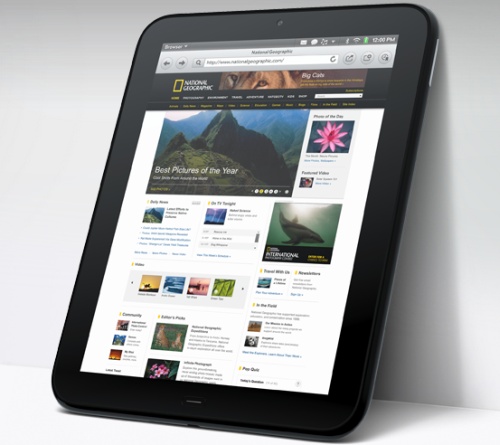 HP is describing the tablet as the first member of the TouchPad family, implying that there will be more devices in the future — presumably with different screen sizes. The company is also showing off some of the accessories for the TouchPad including a keyboard, stand, case, and Touchstone dock for wireless charging. when using a supported HP networked printer, you’ll also be able to send print jobs from the Touchpad to your printer without wires. 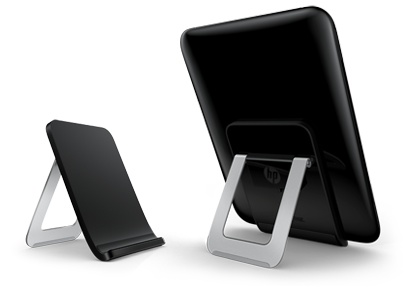 While webOS doesn’t have hundreds of thousands of third party apps like iOS or Android yet, the TouchPad will have some top notch apps available at launch including Angry Birds, Facebook, Last.fm, NBA, and Time Magazine. Amazon has also announced plans to develop a Kindle eBook app for the TouchPad. 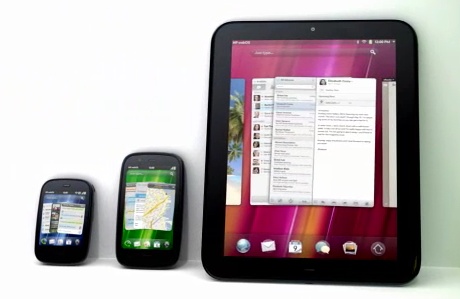 HP also unveiled two new phones today, the HP Veer and the HP Pre3. The Pre3 is the next generation of the Palm Pre, and features a 3.6 inch, 480 x 800 pixel display, a 1.4 GHz Qualcomm Snapdragon 8×55 CPU, a slide-out QWERTY keyboard, a 5MP camera with a flash and a front-facing camera for video calls. It supports 802.11b/g/n WiFi, HSPA+ and EVDO, and will be available this summer with 8G or 16GB of stroage.

The HP Veer is a much smaller smartphone which HP describes as being the size of a credit card. It has a 2.6 inch, 320 x 400 pixel screen, an 800 MHz Qualcomm Snapdragon 7230 processor and support for Adobe Flash, HSPA+, 802.11b/g WiFi, and Bluetooth 2.1. It can also be used as a mobile hotspot to share your mobile broadband connection with a laptop or other device.

You can find more details at the Palm web site and at Engadget’s liveblog.