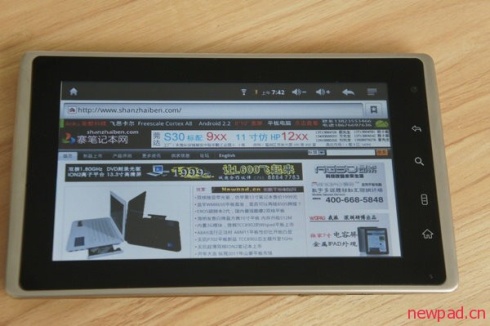 The HaiPad line of tablets have a reputation for being cheap and… well, that’s really about it. The WiiPad Slim Plus tablet I reviewed and gave away recently was a rebranded HaiPad M701, and while it was probably one of the better sub-$200 Android tablets I’ve seen, that’s not really saying all that much. But now the company behind the HaiPad tablets has a new model which actually looks pretty interesting.

The HaiPad M703 is a 7 inch tablet with an 800 MHz  AmLogic ARM Cortex A9 processor which should be much zippier than the ARM11 chips powering earlier HaiPad models. The tablet runs Google Android 2.2 and can handle 1080p HD video playback. It also has a Mali GPU for 3D graphics and an HDMI output for pumping HD video to an external display. The tablet can also support Adobe Flash Player 10.1 for Android.

Unfortunately the tablet itself still has a low resolution 800  x 480 pixel display — about the same resolution as you’d expect from a smartphone with a 4 inch or smaller display. It appears that the tablet will be available with a choice of a resistive or capacitive touchscreen (and I mean choice as in, the OEM can sell the tablet to distributors in large quantities with one screen or the other… customers probably won’t have much choice).

You can check out a video from NewPad.cn after the break, showing the tablet in action.