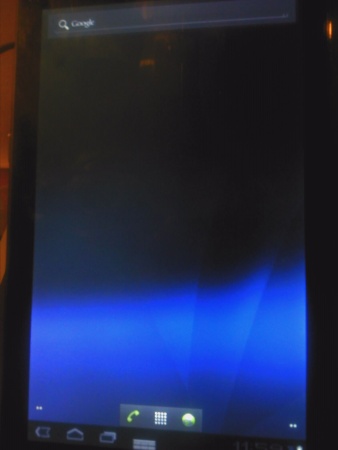 The 5 inch Streak is really more of an oversized phone than a tablet. It has the same 480 x 800 pixel display as most high-end Android smartphones, and a single core Qualcomm Snapdragon processor. But the device has a display that’s a bit bigger than those on most phones, which makes it look a little funny when you hold it up to your ear, which I guess is the reason Dell calls it a tablet, even though you can make phone calls on the Streak.

The version of Honeycomb Hyde ported to the Streak is based on the emulator image from the Android 3.0 software developer kit. It’s the same image hackers have used to get Honeycomb up and running on the Barnes & Noble NOOKcolor eBook reader.

Despite the fact that there’s no 3D acceleration yet, Hyde says the OS doesn’t fell that slow. Unfortunately the touchscreen isn’t working all that well at the moment. Hyde says he’s nowhere close to releasing the files for users to download, since things are still pretty buggy at the moment. But you can find more pictures at the MoDaCo forums.

Update: Steve has uploaded a video, which you can check out after the break.

One reply on “Google Android 3.0 Honeycomb ported to the Dell Streak 5 inch tablet”