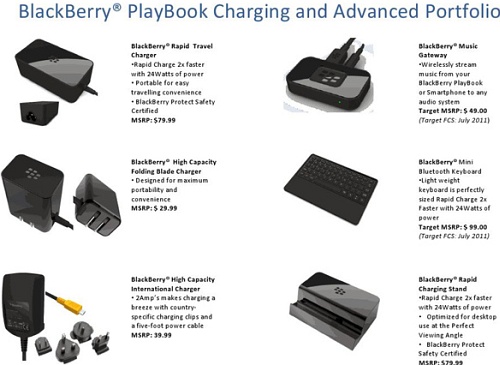 When Research in Motion brought the BlackBerry PlayBook to CES last month, the company had a few cases and other accessories on-hand. But it’s a safe bet that third party companies are going to crank out keyboards, cases, screen covers, power adapters, and other goodies for any device getting as much positive buzz as the PlayBook. Now the folks at Blog.Fommy have obtained what are said to be leaked slides from RIM showing some OEM accessories and suggested retail prices.

There’s nothing really shocking in the mix, but it’s nice to see a few solid looking cases including some that can serve double duty as tablet stands. There are also some power adapters described as “rapid chargers” which will apparently be able to charge the tablet’s battery twice as fast as a standard charger… for about twice the price.

There’s a Music Gateway accessory listed, which will stream music from the tablet or a BlackBerry smartphone to a home audio stystem, and a Bluetooth mini keyboard. And of course, there are a bof cases including slip cases, zippered cases, and binders.