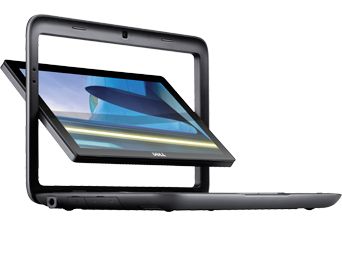 The Dell Inspiron Duo functions both as a standard Intel Atom powered netbook and as a Windows 7 tablet. That’s because the lid has been specially designed so that the screen rests on a hinge inside the upper portion of the laptop. All you have to do is push the screen back 180 degrees and close the lid to turn the laptop into a tablet.

The Duo garnered quite a bit of attention when it was first introduced, but as far as I can tell, enthusiasm waned a bit when the computer actually went on sale for $549. While there aren’t many convertible tablets for that price, it’s still a lot of money for a computer that’s really no larger or more powerful than an average netbook — especially one that weighs 3.4 pounds and gets just 2.5 hours of battery life.

The good news is that now that the Dell Inspiron Duo has been available for a few months, we’re starting to see it sold at a discounted price. The Microsoft Store is offering the Duo for just $399 right now. That’s still a bit high by netbook standards, but it’s not that high, especially considering the Duo’s specs.