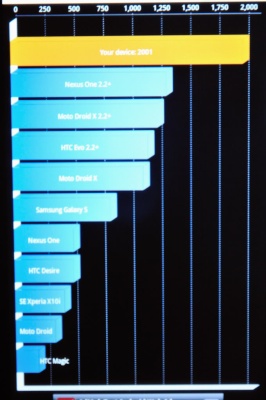 The Creative ZiiO 7 is one of the first Android tablets from Creative to feature the company’s new ZMS-08 media processor. We know that the chip is designed to 1080p HD video playback, and high quality Bluetooth audio. But how does the ZiiO 7 stack up against other Android devices with speedy chips?

Hardware Zone forum member ShermanTank has run the Quadrant Benchmark on the ZiiO 7 and the tablet performs pretty well. In fact, thes score of 2001 shows the tablet coming out ahead of the Google Nexus One, Motorola Droid X, HTC Evo, and many other smartphones.

That’s even better than the scores we’ve seen for some NVIDIA Tegra-2 based systems, such as the Notion Ink Adam tablet, but IntoMobile benchmarked the LG Optimus 2X smartphone and got a score about 500 points higher.

Systems with NVIDIA Tegra 2 chips tend to score about 500 points higher, but it looks like the ZiiO 7 is no slacker.

Benchmarks usually only tell a part of the story, since they don’t necessarily show how a device will perform under real-world conditions. Sometimes a web browser, for instance, will come out heads-and-shoulders above the competition in JavaScript performance, but since JavaScript isn’t the only thing a web browser needs to read, other browsers may feel faster in day to day performance.

That said, benchmarks do provide a way to compare computers and other devices since each system has to go through the same test.